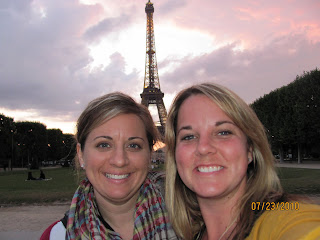 Paris is an incredible city. To be honest, I was quite overwhelmed by its size when we first arrived. I tend to be a needs-lots-of-green-wide-open-spaces kind of girl, and Paris is just the opposite. It’s home to 11 million people and has the highest density of people of any city in Europe- 20 times greater than that of New York City. Good grief!

Fortunately, after being there a day and getting a feel for it, I found Paris to be beautiful and restful. The architecture and general ascetic are just lovely. I couldn’t get enough of the wrought iron balconies, the spots of color found in shop awnings and flower boxes filled with geraniums, and the simplicity of their table settings.

We were able to see a lot of the major sights in Paris and I’ll be posting links to more pictures once I get home. I am still processing the fact that I’ve been able to see all of these amazing places, so more reflection on it all will come later. For now, here’s just a basic rundown of what we were able to see each day:

* Friday: Travel day to Paris. Our hotel is really close to the Eiffel Tower, so we walked around and got a feel for the area. We were quite excited!

*Saturday: We took a day trip out to Versailles, the grand palace that was once home to the infamous King Louis XIV and his successors. Words can hardly describe how impressive the Chateau and gardens are, but decadent, lavish, and beautiful are a good start. I hope to write more about it soon, because it was very interesting to walk around a place that was so obviously built to glorify man, not God (that’s how it was described in the tour book!).

*Sunday: We made our way (hop on, hop off) to Notre Dame and Sainte-Chapelle, and were amazed by these buildings that were built so long ago and with such beauty. The stained glass windows are just incredible, and Debbie and I enjoyed figuring out which Bible stories were being told in each scene. In the afternoon, we spent some time at the D’Orsay Museum and saw works by Monet, Degas, Renoir, and Van Gogh. Then we grabbed some food at the store and had a picnic in front of the Eiffel Tower for a few hours. I loved seeing the sky change behind it as the sun went down! Plus, a guy started singing and playing his guitar near us, and Debbie and I turned to each other and said, “Wow! He’s really good!” So, we had our own mini-concert by some random French guy, who sang us some French songs and some of my fav American pop- a little MJ, Gaga, and Rihanna. It was perfect.

*Monday: We spent a few hours in the Lourve- you could spend a year there and still have plenty to see, so we just hit the big guns: the Mona Lisa, Venus de Milo, and the Winged Victory of Samothrace, to name a few. The Venus de Milo is a statue that dates back to 100 B.C. That means that she’s older than Jesus! Well, I guess technically Jesus doesn’t have an age since he’s always existed as a part of the eternal Trinity, but you know what I mean. She’s older than Christmas. That’s better. Later that evening, we went to the Arc de Triomphe and then walked around the Champs-Elysees (THE boulevard in Paris, which is home to the Louis Vutton and Sephora flagship stores- pretty impressive!)

It was an amazing few days! Au Revoir!